I don’t normally blog for photographers, but I wanted to post my comparison of Fuji 400h vs Portra 400 vs Portra 800 here. My favorite film stock, Fuji 400h, has been discontinued, which means I need to determine which film stock I’ll shoot moving forward.

I decided to test all 3 stocks across several scenes to compare their colors. I wanted to see whether Portra 400 or 800 would be the better fit for my preferred aesthetic. All images were scanned on Frontier by PhotoVision. I had to shoot a full roll of each stock back to back, so the timing between each scene might vary by about 20-40 minutes for the outdoor setups.

I minimally edited the images and ensured they were all within the same ballpark for their overall colors and exposure. This way, I would know how cohesive they would look if I was shooting multiple stocks for the same wedding and I would also be able to see the finer differences in tones between the stocks. If I were to redo this test for better accuracy, I would shoot with a grey card so I could ensure complete accuracy with my white balance across all edits.

For first set of scenes, I photographed three different silk bouquets in open shade. The first two rows of silk bouquets were photographed with a mauve pink backdrop on top of a true grey velvet cloth. You can easily tell that the Portra 400’s grey cloth reads much more blue than the other stocks.

For the third row, I put the mauve backdrop on the bottom and used a very light green linen board as the backdrop. 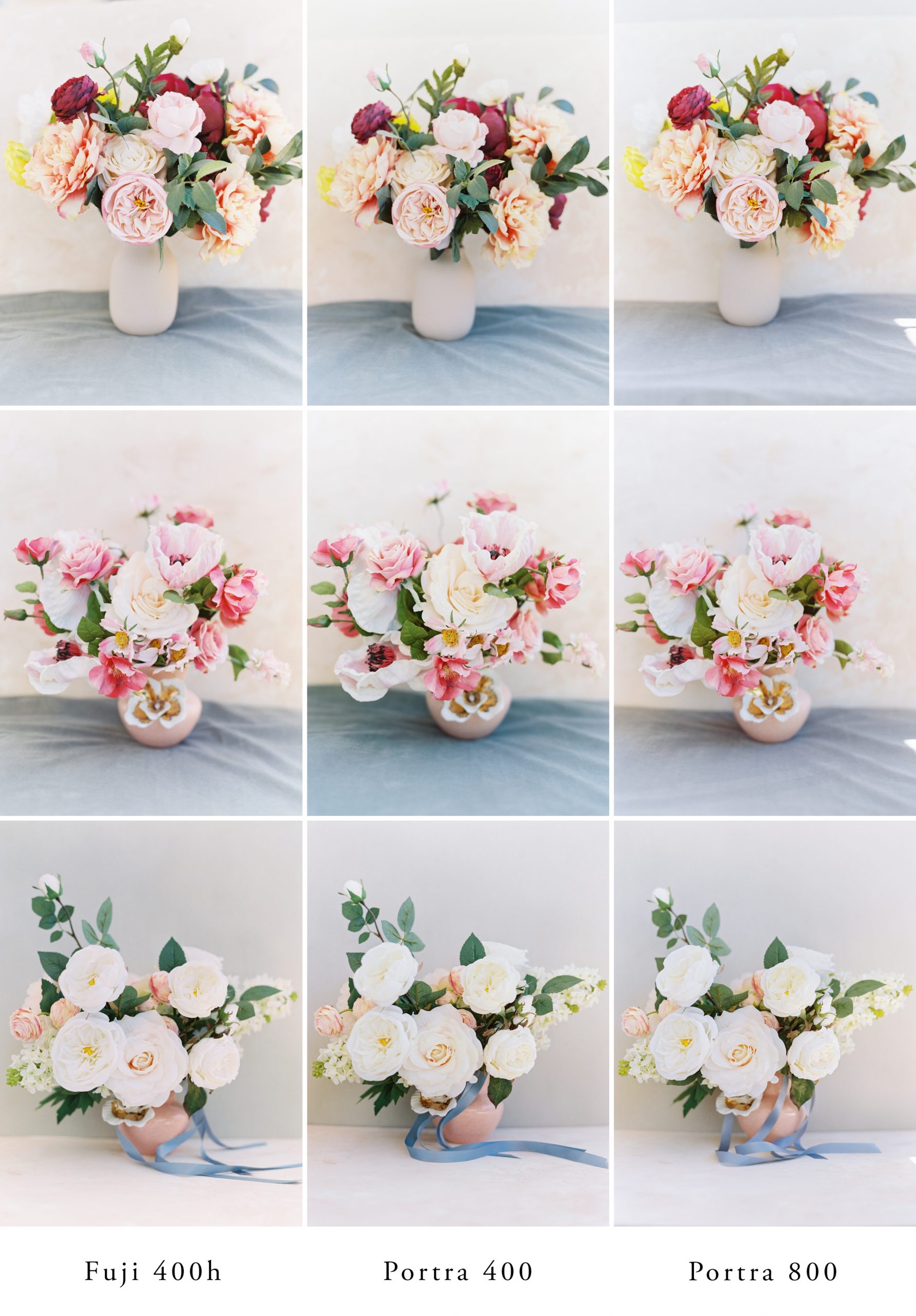 My second scenes were also shot in open shade. These images all have extremely similar tones. The Fuji blue differs slightly in the shoe shots from the Portras, whose tones look fairly identical with the 400 being a bit more aqua. 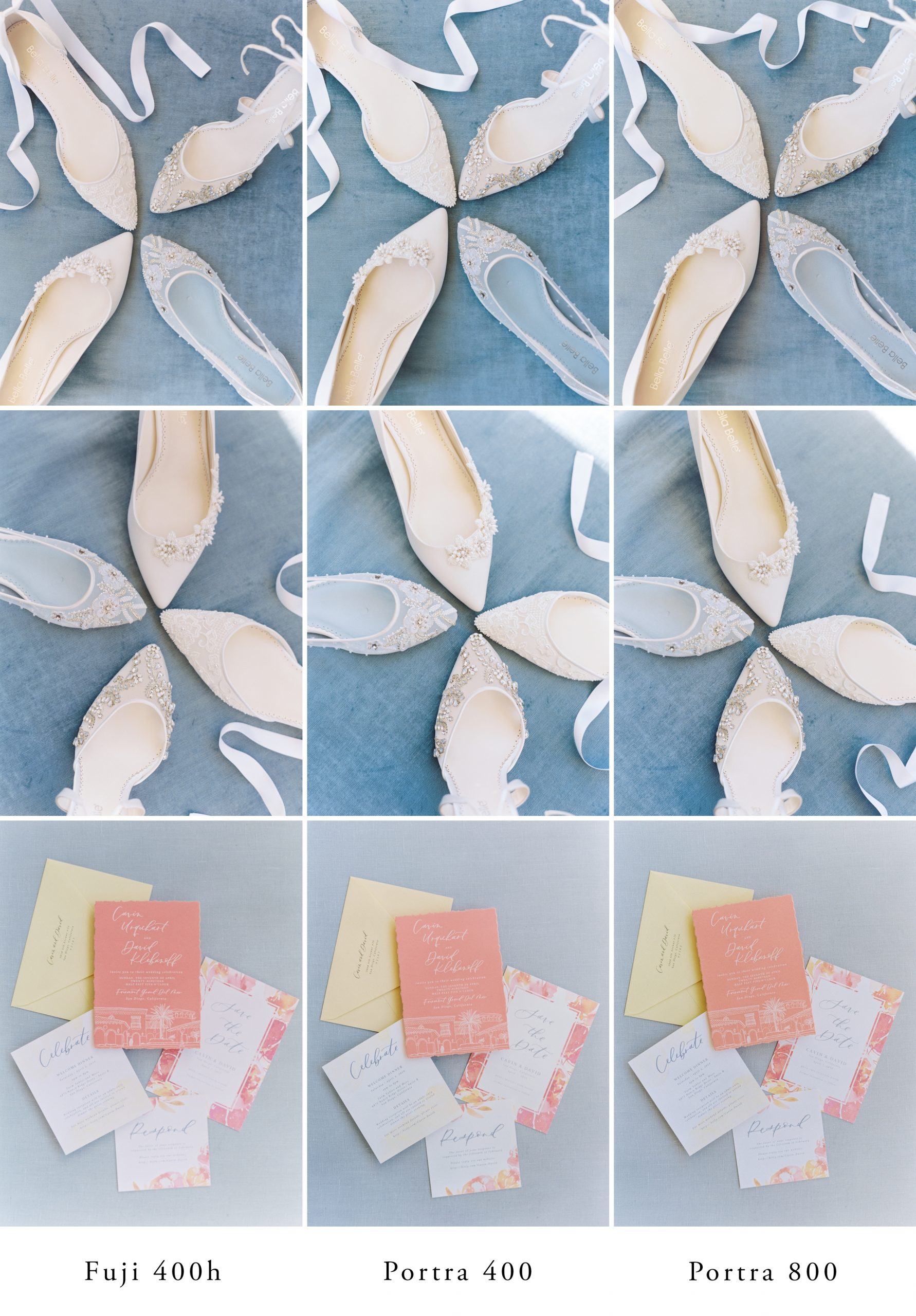 My next scenes are either artificial lighting or mixed lighting. The top row of the floral wall is all artificial lighting. In editing, I did notice that the Portra shots were more contrasty than the Fuji. I’m not sure if this was due to the stock or the scanner. For the middle row of gowns, you can see more blue tones in the floor of the Portra 400, which is similar to the grey cloth in the first scene.

I also see more blue in the shadows for Portra 400 in the mannequin shot, which has some artificial lighting in the background and window light coming from camera right and also hitting the front of the mannequin. The tones of the gown are also different across the stocks and I could not get them to match, although I think I could have warmed up Portra 800 by +1 or +2. 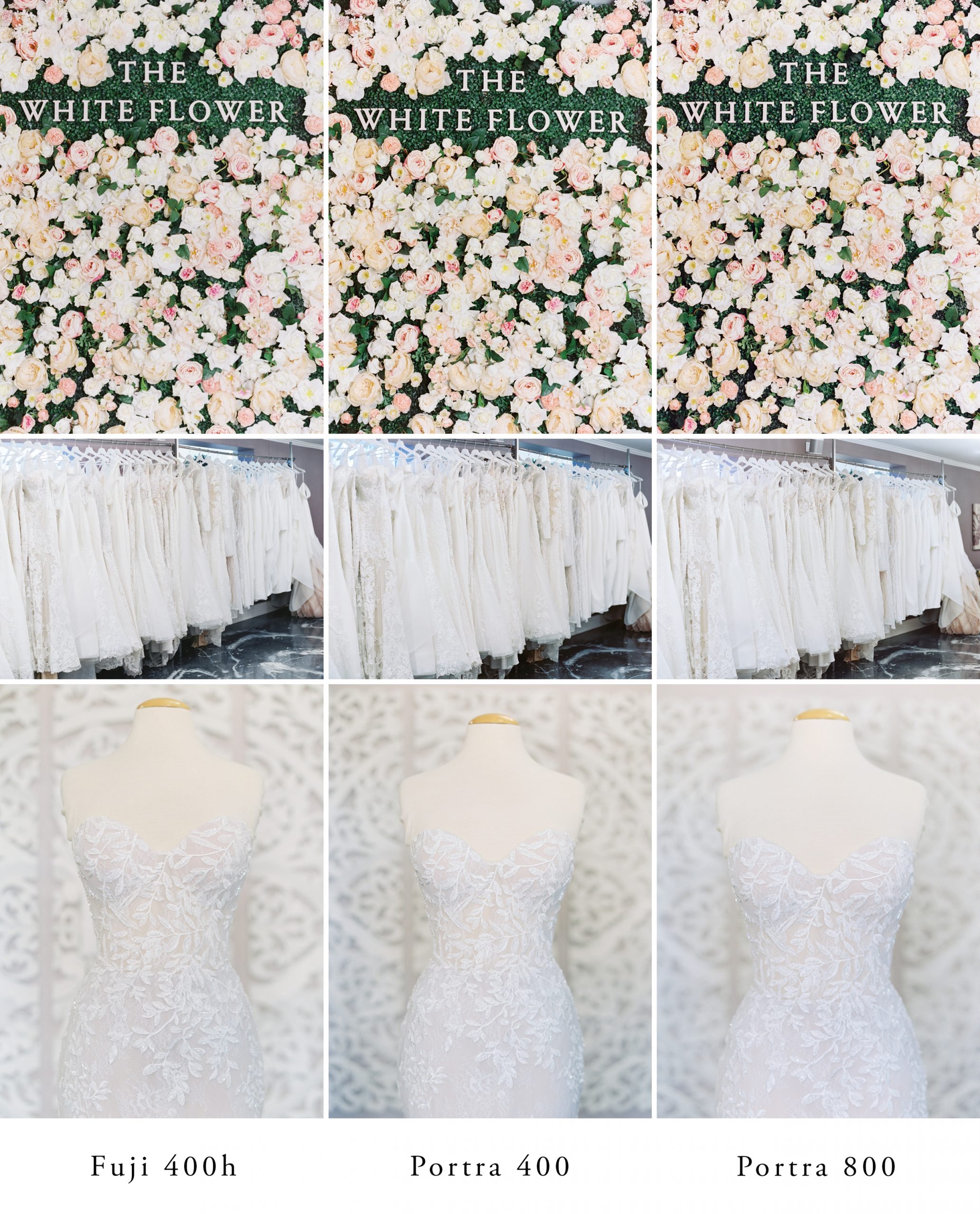 This next scene features full sun for the top row and open shade/a touch of backlight for the bottom rows. There is some variation in the shadow tones for the top row and definitely more obvious differences in tones for the bottom rows. What’s difficult to know is how much of an impact the variation in lighting vs the variation in film stocks has on the difference in tones. You can see that Fuji 400h and Portra 400 have some backlighting while Portra 800 is just in open shade. 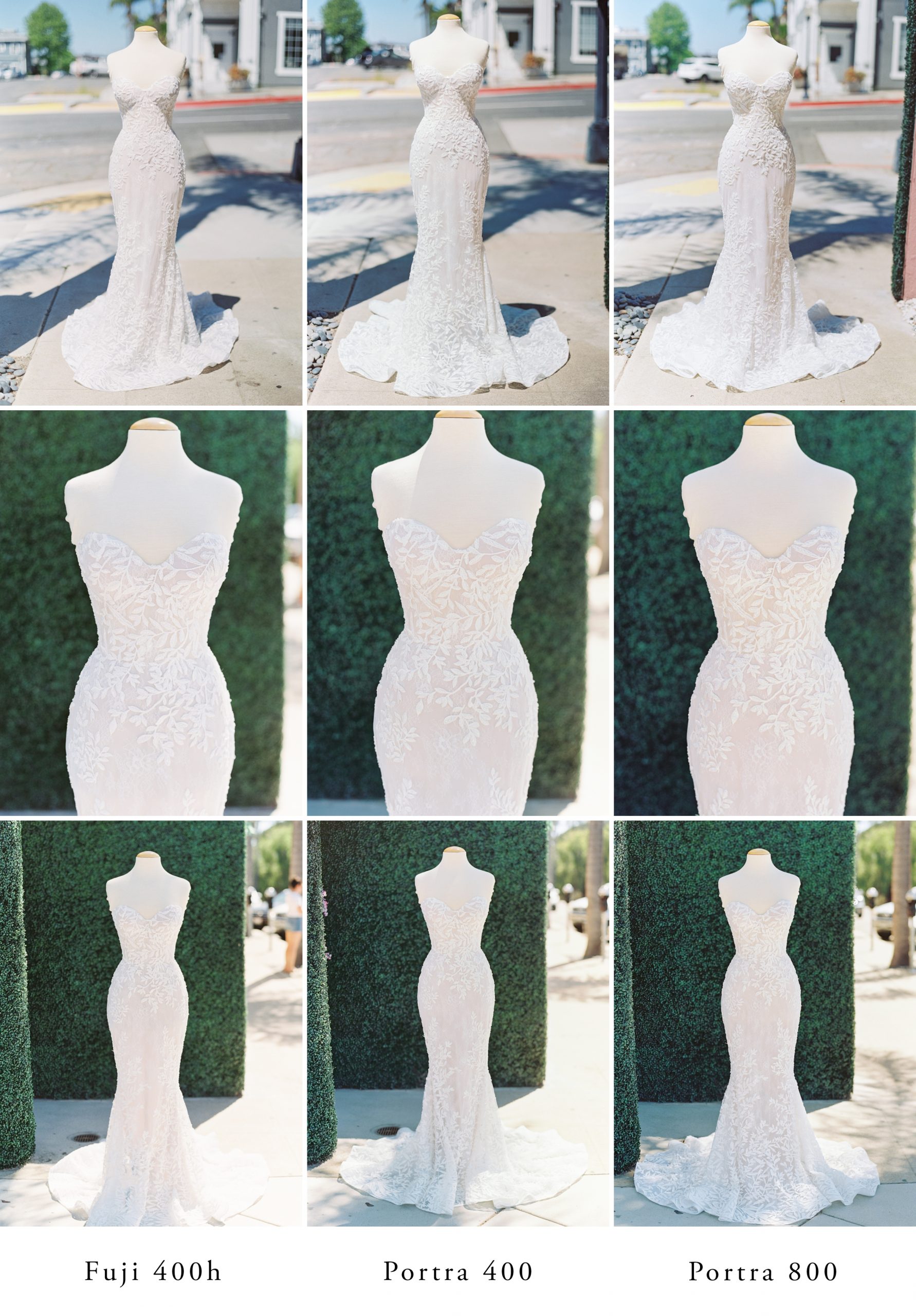 For the last scene, I wanted to see the difference in skin tones across the film stocks. I found that Portra 800 was the more contrasty stock and was more reddish with the strongest blues in the shadows. The Fuji 400h did have more backlight, giving the appearance of more warmth and haze. 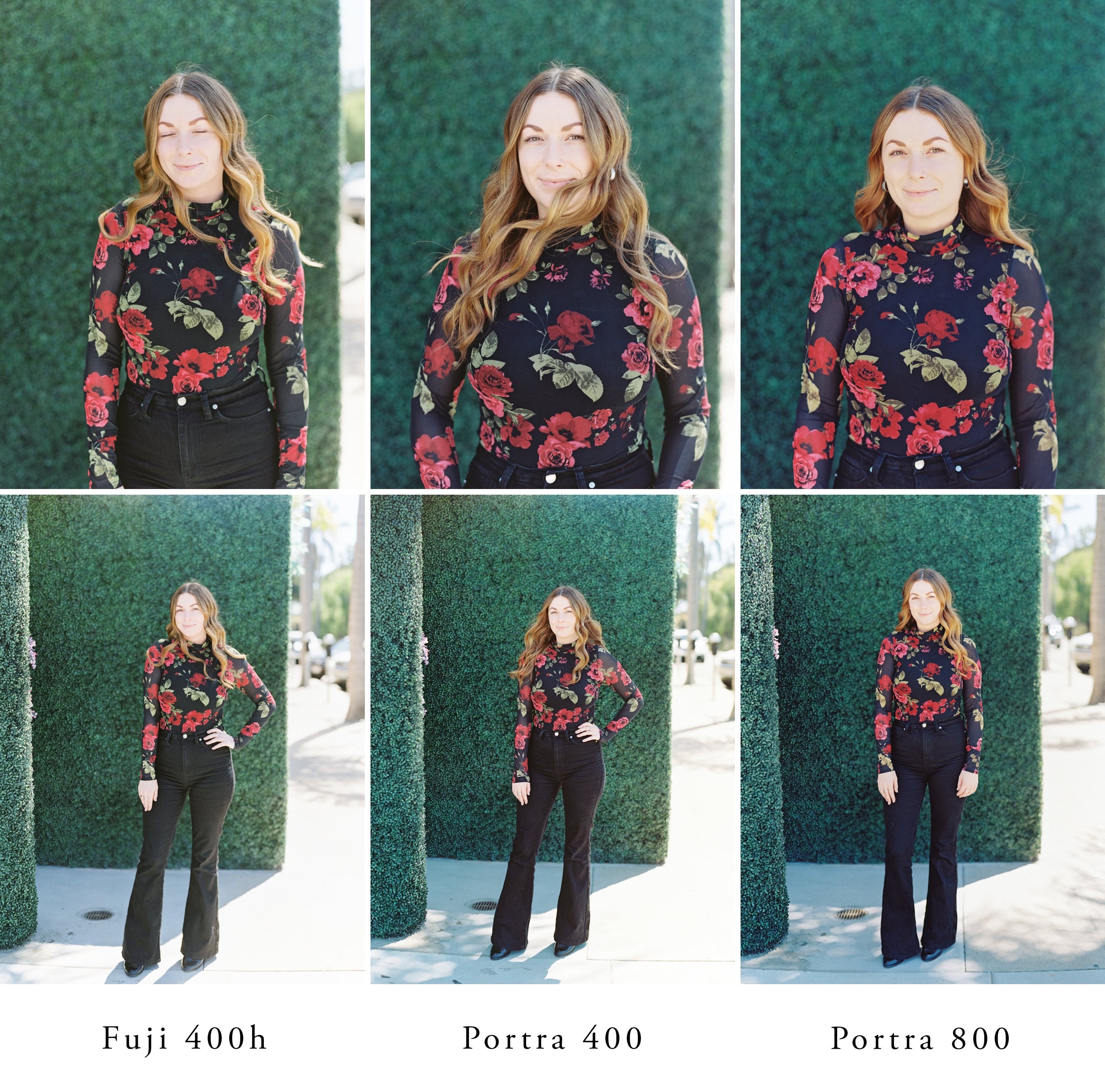 To be honest, with the HSL sliders in Lightroom being so able to fine tune colors, I don’t think the discontinuation of Fuji 400h will take as big of a toll on my workflow as I initially thought it would. There isn’t that much of a difference in the film stocks, especially once they are edited to look similar enough to each other.

Since Fuji is being discontinued, Fuji wedding shooters will likely choose between P400 or P800 (or shoot both). Given that Portra 800 is so expensive, if you’re equally a fan of both, I would opt for Portra 400 for the savings. That said, if you tend to shoot Portra 400 metered at 200, you might prefer having the extra stop of light shooting Portra 800 at 400.

Personally, after this test, I think I will choose Portra 400 for the cost. I don’t think I can justify spending the extra money on Portra 800. I didn’t see enough of a reason to choose Portra 800 over 400. PhotoVision has suggested that Portra 400 can be shot at box speed, so I’ll be testing out metering at 200 vs 400 to see if I can permanently shoot at box speed. It would be incredible to have that extra stop of light!